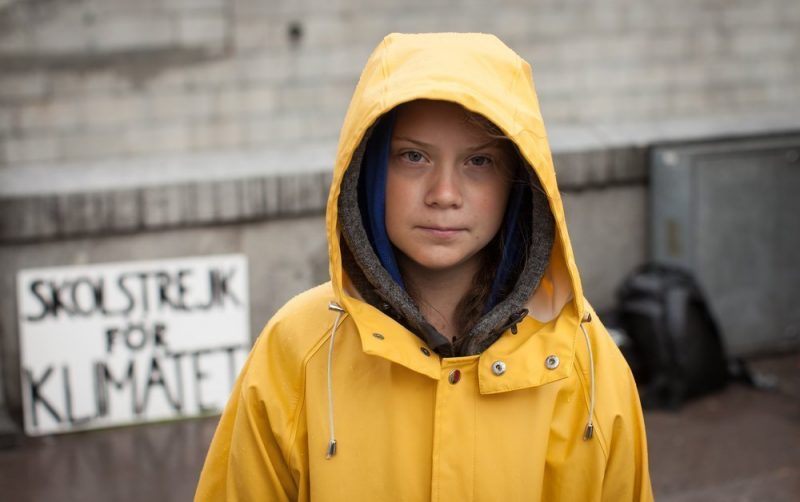 The social pressure to conform to ‘the norm’ is strong enough that we tend to sit up and take notice when people very publicly refuse to do so. In the late 90s, a struggling software company called Apple (maybe you’ve heard of it) created the wildly successful ‘Think Different’ advertising campaign, which spoke directly to our fascination with nonconformists. The centrepiece was a video saluting “the crazy ones”, some of the most iconic individuals of the 20th century. They all had a lasting impact on society precisely because they “thought differently.” Their messages had unique frequencies that cut through the noise.

I was thinking about this recently because of Greta Thunberg, who was in Alberta and B.C. last week, continuing her climate change advocacy. This pair of images beautifully illustrates how, in a single year, Greta has transformed from lone teen protesting government inaction on climate change outside Swedish parliament, to figurehead of a massive international youth movement. And since we are neurodiversity enthusiasts at Spark, it’s been refreshing and exciting to see people take note of Greta’s autism as key to her being such an effective activist.

Hold on while we get a little academic here for a moment. Neurodiversity refers to a way of recognizing differences in cognition without pathologizing (ie. treating as psychologically unhealthy) those differences. In this view, conditions such as autism, dyslexia and dyspraxia are examples of the normal variation in human cognition, rather than disabilities or disorders.

This lens rejects societal norms of hierarchy in cognitive functioning – namely our tendency to see neurodivergent people as less intelligent. As John Elder Robison – a writer and activist on the autism spectrum – explains, the neurodiversity paradigm grants a dignity to people whose minds work differently, while still acknowledging that they may have a real need for supports or accommodations:

“We can accept that neurological difference is a natural part of us while still working hard to minimize or eliminate its negative effects. At the same time we should recognize and celebrate the very real benefits difference confers on many of us, and embrace people as they are.”

Understanding the concept of neurodiversity is important because it’s a crucial element of Greta’s story.

Greta talks about herself using the language of neurodiversity.

Greta has referred to her Asperger’s – a subtype of autism – as her “superpower.” As Steve Silberman, author of Neurotribes: The Legacy of Autism and the Future of Neurodiversity has discussed, there are two traits related to her Asperger’s that have supercharged Greta’s advocacy.

The first is a tendency to hyperfocus on a single, particular interest. In Greta’s case, that interest is climate change. She has been passionate about the topic since she was 9, and that fascination gives her an energy and focus that has fueled her steady and relentless activism. In Greta’s words: “It’s very common that people on the autism spectrum have a special interest…I can do the same thing for hours”.

The second trait is blunt honesty combined with a special contempt for lies and hypocrisy. This comes through again and again in Greta’s speeches. Her approach is not exactly of the cheerleading “we can do this together!” variety. The tone is steely and the message is intended to shame world leaders for making this her generation’s problem. Her recent speech to the UN was particularly forceful:

“You have stolen my dreams and my childhood with your empty words. And yet I’m one of the lucky ones. People are suffering. People are dying. Entire ecosystems are collapsing. We are in the beginning of a mass extinction, and all you can talk about is money and fairy tales of eternal economic growth.”

That may sound extreme to some ears but the message is resonating powerfully with the generation of young people who have grown up amid increasingly dire warnings from climate scientists.

Greta’s success as an activist is an invitation to celebrate neurodiversity.

The neurodiversity paradigm still recognizes the reality of mental disorder and illness and the need for treatment. It simply challenges us to see the subtler benefits of neurodivergence, rather than focus entirely on the drawbacks as we’ve traditionally done. As Silberman puts it, “many people with autism throughout history have been ignored and shunted to the margins of society, and condemned as weird, insane, or worse. But the idea that people like Greta Thunberg have valuable insights not in spite of their autism but because of it is gaining ground.”

As some of the responses to Greta’s activism show, it is still common for people with autism to be dismissed as lacking real agency, or as being “mentally ill.” But Greta’s obvious intelligence and moral clarity stand as a clear rebuke to that limiting and negative way of viewing neurodiversity. It’s disappointing that there are still voices who would discredit her for being different. But those voices are being largely drowned out by the millions of people who admire her for it.

A few weeks ago I took my three-year-old son to the Climate Strike in Ottawa. It was one of thousands of demonstrations that took place as part of the Global Climate Strike. Over 7 million people in 185 countries participated. It’s a powerful feeling, taking part in something meaningful with millions of other people.

But in the midst of that feeling I was reminded that the Global Climate Strike began with one person. One person who, by her own admission, sees the world “a bit different.” Different enough that she was willing to challenge the system on her own, at an age when most of us are thinking about simpler things. As I’ve watched her inspire a generation of young activists, I’m very glad she has refused to “think the same.”