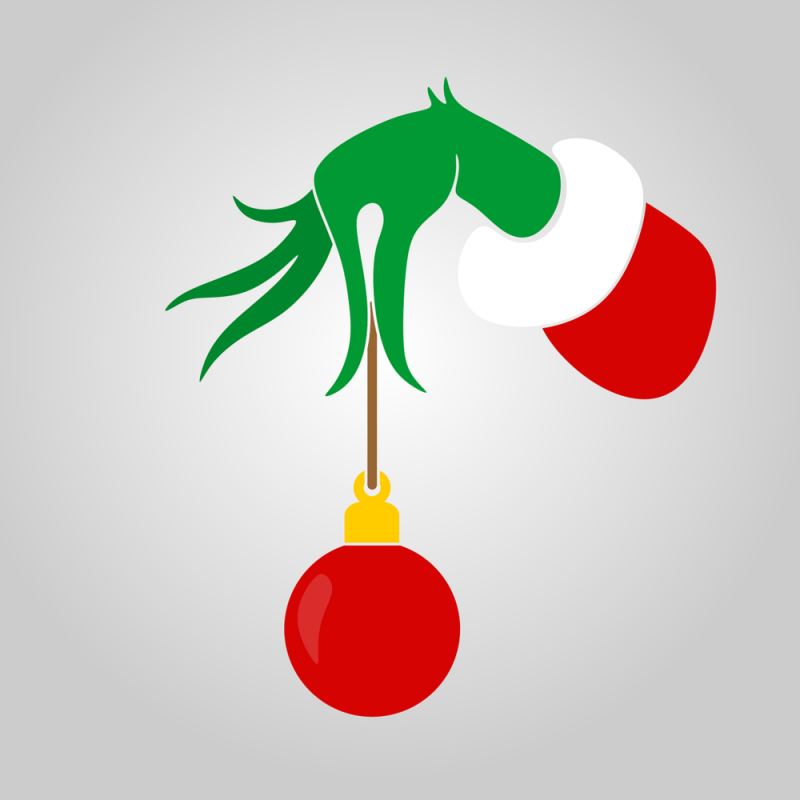 Dr. Seuss’ How the Grinch Stole Christmas! is a Christmas classic and I’ll brook no argument on the subject. I’m referring, of course, to the original 1966 television special (I haven’t seen the new film currently in theatres, and I’ll save my opinions on the Jim Carrey version). When I was a kid I watched it pretty much every year. A few weeks ago I officially became an adult by watching it with my kids for the first time.

It’s a tidy little piece of filmmaking – well-paced, fantastically scored, and loaded with brilliant little details. The Grinch actually slithers across the floor during the line read “he slithered and slunk”. Later, he preposterously goes to the trouble of plucking individual petals from some poor, unsuspecting Who’s flowers, just to be a jerk.

I don’t know if I was paying more attention for my kids’ sake, or if I’m just getting old (probably both!), but on my approximately 25th viewing, I “thought of something [I] hadn’t before.”

I love the Christmas season and I always have. But that’s a reflection on what a privileged life I’ve led. The reality is:

Christmas is a difficult time for a lot of people.

I’m not exactly breaking news with this idea. Maybe this is your first Christmas without someone you love, and all you feel is grief. Maybe you lost someone right around the holidays, and 10 years later you still feel their absence. Maybe you’re dealing with an illness, injury or condition. Maybe your family dynamics are complicated or painful. You don’t get to be with them at a time when it seems everyone else is with theirs. Or you are with them, but kind of wish you could opt out. It could be that you find Christmas too religious, not religious enough, or culturally exclusionary (given that the holiday’s origins are multicultural, I’d argue that it at least has the potential to be universal). Or maybe the reason is financial. People tend to spend a lot this time of year. Maybe you find it too consumerist. Maybe you just don’t have any extra money to spend.

There are plenty of valid reasons to not be this guy when Black Friday rolls around. Which is why the opening stanza from the story hit me in a new and profound way this time around:

“Every Who down in Who-ville liked Christmas a lot…
But the Grinch, who lived just north of Who-ville, did NOT!
The Grinch hated Christmas! The whole Christmas season!
Now, please don’t ask why. No one quite knows the reason.
It could be, perhaps, that his shoes were too tight.
It could be his head wasn’t screwed on just right.
But I think that the most likely reason of all,
May have been that his heart was two sizes too small.”

Dr. Seuss has said that the Grinch is primarily based on himself. But all good stories invite a variety of interpretation. And the intro of this story invites us (with the clever reverse psychology of “please don’t ask why”) to ask some deeper questions about this cranky, green recluse:

HE “LIVED JUST NORTH OF WHO-VILLE.”

Why does he live alone, right next to a town that seems to be a model of good community?

Did he choose this?

Does he live alone because he finds social interaction painful, scary or difficult?

“HIS SHOES WERE TOO TIGHT.”

Why are his shoes too tight?

Can he not afford new ones?

Does this cause him regular discomfort?

Why has no one given him better shoes?

Is he struggling with a mental illness?

Does he suffer from chronic migraines?

Has he experienced some kind of trauma?

HIS HEART WAS TWO SIZES TOO SMALL.

Does he have a heart condition?

Did he lack the necessary modeling to develop empathy as a kid?

The story doesn’t answer any of these questions. And considering it refers to the Grinch as, among other things, “a foul one” whose “heart’s a dead tomato splotched with mouldy purple spots”, it’s not exactly a perfect model of empathy. But, the redemptive ending – the Grinch seated happily at the Whos’ communal table – seems an important tell on the matter of his true character.

Is ascribing real world trauma and hardship to a villainous cartoon character a reach? Maybe. But I think any opportunity to practice empathy is worth taking.

There’s always more to the story.

If you, or someone you know, feels down during the holidays, maybe it’s worth investigating why. Maybe we need to let go of the expectation that we all summon our inner Buddy the Elf during the holidays. Instead of insisting that Christmas be White, we should let it be Blue. Accepting “Blue Christmas” – the discomfort, loneliness, alienation or grief that some people feel during the holidays – is an opportunity to show empathy and kindness. To yourself, to a Grinchy friend, to everyone.

If you’re entering Christmas feeling Blue or Grinchy, maybe this is a chance for you to remind the rest of us about what’s really important. And if you’re feeling like this, maybe it’s a chance for you to stop and listen. Whether or not you’re the “singing hand in hand” type, powerful and profound things can happen when people stop, come together and focus on what gives our lives meaning.