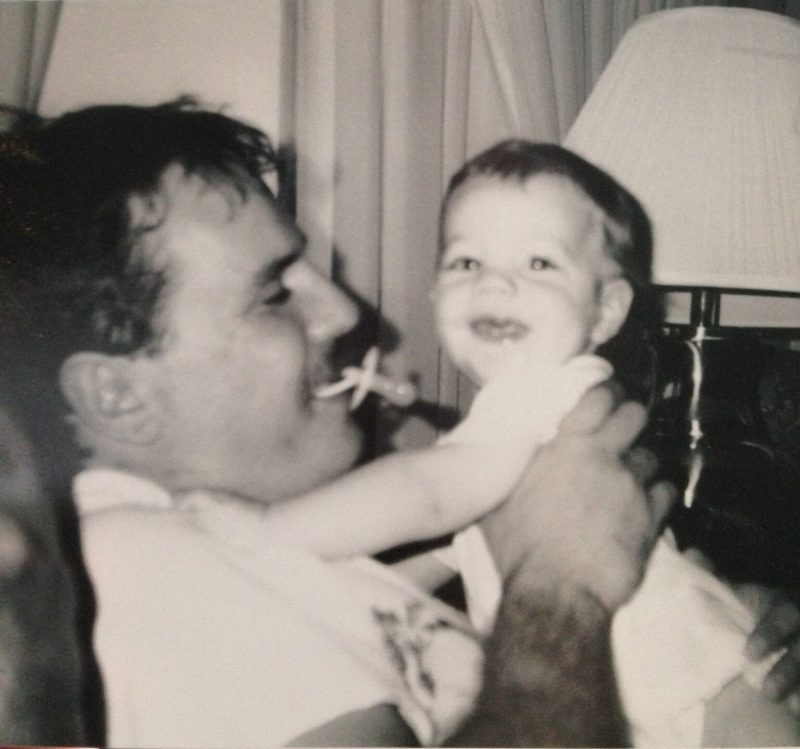 Like my father and his father before him, I’ve battled anxiety all my life. I learned early how important it is to talk about it. It’s taken some time, but I’m finally ready to share my story.

I grew up in Kapuskasing, Ontario. Industry town. Remote. A great place to grow up, but also a tough place to grow up. Like most people from Kap, my dad worked at the local mill.  It was hard work – constant noise, heavy machinery, long hours. Over time it wore him down.

Growing up in Kap, you didn’t talk about mental health. Alcoholism and depression were common but you wouldn’t know it from the outside. Like his father before him, my dad had been battling anxiety and depression his whole life. The stress and exhaustion from work slowly made it worse. For years he managed without really dealing with it. He kept it hidden from us until eventually it became impossible to hide. That was around when I started high school. From then on, his illness was this constant presence in our home, like a thick fog.

I was never a great student. I’m the type of person who always asks “why?” “What’s the benefit of this?” School didn’t always have an answer to those questions. I didn’t fit there. What I really loved was working with kids. When I was 15 I worked my first summer at a camp run by Family Services. That’s where I found my passion. My purpose.

I was brought up to see a lot of potential in people, and I saw it in the kids at Camp Cadanac. Many came from the foster care system and low income families. Many struggled with behavioral issues, ADHD, anxiety, intellectual and physical disabilities. Many were already highly medicated. They were all unique, but they’d all been dealt a rough hand.

My camp name was Scuttle, after the seagull from The Little Mermaid –  fun, goofy, always ready with an idea for the next crazy thing.. Camp was an outlet, a second home. I was surrounded by kids who I connected with. Kids I related to. In my third summer I became the camp coordinator. It was the best time of my life. I met my future wife and mother of my two sons, Cooper and Preston. At home, though, the fog was getting thicker.

Heroic Through the Struggle

In the summer after my first year at Lakehead, it became clear that Dad needed the kind of help we couldn’t provide. We sat down as a family, pooled our resources together, and got him a spot in one of Canada’s most sought out rehab facilities.

My dad was heroic through the struggle. He went against the grain and spoke openly about his illness. He encouraged me to use my story to help the kids I was working with. He used to tell us, ‘if somebody breaks their arm or is diagnosed with cancer we sympathize with them. If somebody has a mental illness we back off, we don’t know how to deal with it. But they’re the same. They’re the same.’

That fall I transferred to the Social Sciences program at Ottawa U. For the next three years I pushed through, trying to finish my degree. During that time my dad was in and out of rehab multiple times. One afternoon while I was studying, I got a call from my doctor. “If you don’t bring your dad into the hospital he’s not going to make it through the weekend.” I made the 10-hour drive to Kapuskasing to check him into the hospital. He weighed only 80 lbs at the time. After that I made the drive home as often as I could.

In the summer after my 3rd year at Ottawa U, I was given more bad news. Camp Cadanac had closed for restructuring. I was already providing respite care in my spare time and loving it. I was really connecting with kids who were struggling at home and in school and making a difference in their lives. With camp closed, I stayed in Ottawa for the summer to do respite full time. I didn’t go back to school that fall.

I took my last ten thousand from my student loan and registered for the best training I could find on connecting with and inspiring individuals facing various challenges. I trained all over Canada, in Louisiana, London and Paris. At that time I had no thought of starting a company, I just wanted to be the best respite caregiver I could be. But I quickly became frustrated.

I was a cog in a machine that wasn’t working particularly well. I would sit in committee meetings to represent a kid I was working with, and there would be 12 people there who didn’t really know him. Sometimes the parents wouldn’t even be invited. How can you provide good care if you don’t know the person and you’re not involving their family?

I was part of a care system that was all about making sure someone shows up, with little thought put into who shows up and what happens when they get there. To give an example: I once worked with a 12-year old boy who had recently lost his dad. When care had to be discontinued we weren’t allowed to see or speak to each other ever again. You don’t need to be a clinician to understand how upsetting this would be for any kid, let alone one who was already dealing with the pain of a huge loss. Needless to say, I did not follow procedure on this one.

There were a lot of ways my approach differed from my employer’s. The biggest one was my conviction that you have to build a relationship before you can have any impact as a caregiver. When my clients made it clear that they preferred my approach, I decided to set out on my own. Within a year my schedule was full. Referral organizations started approaching me. They wanted to know what I was doing and why it was working so well.

Eventually I had a decision to make: start turning down clients, or find someone to work alongside me. When I met Mike McNeil – whose importance to this story I don’t have space to do justice to here – the decision became an easy one. That’s when Spark was truly born: a social enterprise whose purpose would be helping people live happier, healthier lives.

I’m convinced that all of the credentials in the world mean nothing if you aren’t creating real, meaningful relationships with the people you’re supporting. I felt if we could build a business on a model that put relationships first, if we could find passionate and creative people who not only had the education and experience, but who truly care about their clients, that we could do something special.

Mike’s background in recreation therapy and incredible people skills were a godsend. After he joined the team the referrals were coming in more quickly. We also started getting calls from other people like us. Caregivers who had a real passion for this work, who wanted to do it differently. We were growing fast and attracting attention for our innovative approach. In the fall of 2013, we received the Rising Star Award from Invest Ottawa for our contributions to the city’s startup ecosystem. It seemed like everything was falling into place. I was so excited about where we were headed.

8 months later, Michael “Buzz” Bezan lost his battle with mental illness. His body had been through too much. On July 11th, 2014, his heart suddenly stopped beating.

It Doesn’t Define Us

Growing up, my dad was always the life of the party. Constantly cracking jokes and making people feel comfortable. He loved sports, and was a great hockey player. We would have his homemade pizza at big family dinners and watch the world juniors, loudly informing the players what they really should’ve done with the puck. My parents were old school: strict on being polite and finishing what you started. We often saw things differently but I never felt limited or pressured to walk a certain path. And I never doubted that they loved me.

I started Spark for a lot of reasons. I wanted to make people’s lives better, and this was the best way I knew how to do it. I also wanted to create a workplace that was a real community – a place where you feel valued and empowered. Where you can be yourself. But I also did it for me and my dad. To show him and everyone else that you can have a mental illness and still follow your dreams, that it doesn’t have to define you. I’m not going to lose this battle. I’m going to win it for him.

It took me a long time to begin to face my anxiety and slowly take back control of my life. When it was at its worst, I wouldn’t see anybody. I wouldn’t go out, answer my phone or do much of anything. But something amazing had begun happening. Whenever I was working with a kid, the anxiety would fade away. It turned out that the best treatment for my struggle was helping other people deal with theirs.

I’ve since combined that treatment with exercise, talk therapy, medication, hard work and the love and support of my family and friends. Time spent with Cooper and Preston is therapy in itself. I feel healthier, happier. I know my limitations. I’ll always have anxiety, it’s never going to disappear fully. But I’ve gone beyond surviving. I’ve finally learned how to live.

I’m a misfit. It’s OK to be a misfit. My thinking is: instead of letting the world force you to fit in somewhere, build a community where you and other misfits can fit in together. Spark is more than just a Monday to Friday for us. Spark is our vocation. It’s where we belong.

I’m sharing my story because mental illness is dark, and the only way to fight darkness is to shine a light on it. This July 14th would have been my dad’s 58th birthday. Starting this year, it will be a paid day off for everyone on the Spark team, to spend with someone who struggles with mental illness.

To talk with them, listen with them, laugh with them. A day to tell our stories and shine light on the dark corners of our lives. Buzz Day. Named after my favourite misfit.

Previous PostPrevious Post:
Next PostNext Post:
Feeling inspired?
Work with Spark!
Every open position represents a unique client that has different needs.
Find positions that you feel you are a good personality, education, and local match for.
Apply for an Open Position
Find the care that's right for you and your family
Fill out our referral form to request a free consultation.
Get Started