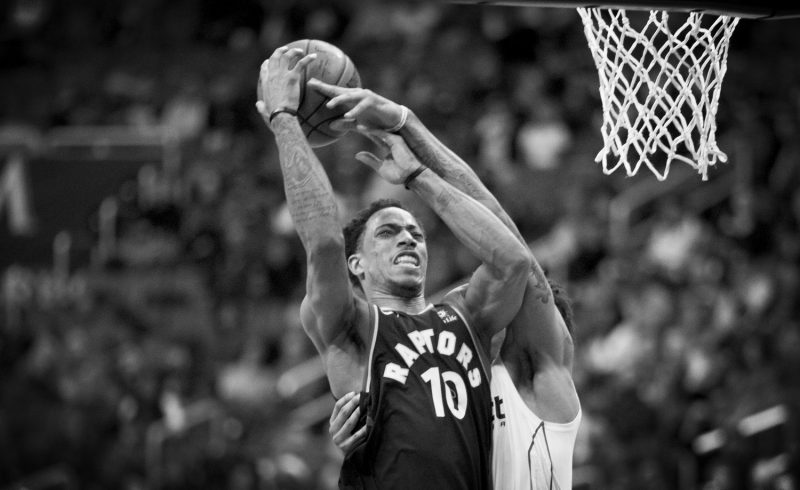 Being swept by Lebron and the Cavs again hurts. But in opening up about his depression this season, the Raptors’ star has done something powerful.

In the midst of leading the Toronto Raptors to the greatest regular season in their history, DeMar DeRozan had the best year of his career. Peaking with a career-high 52 point eruption against the Milwaukee Bucks on New Year’s Day, he was recognized with his second straight selection as a starter in the NBA All-Star game. He is also in the middle of a 5-year contract that will pay him $139 million when all’s said and done. He is, depending who you ask, one of the 25 or so best basketball players on the entire planet.

In other words, DeRozan has reached the mountaintop. And, at the pinnacle of his career, having achieved a level of success most of us only dream of, the famously introverted shooting guard from Compton tweeted this:

A few days later, he opened up to the Toronto Star about his struggle with depression, saying “sometimes…it gets the best of you, where times everything in the whole world’s on top of you.”

To understand how remarkable this kind of honesty and vulnerability from a famous athlete is, you can simply look to the response of one of his fellow All Stars – Kevin Love. Within weeks of DeRozan’s tweet, Love – who won a championship alongside LeBron James in 2016 – wrote an essay for the Players’ Tribune about his own struggles with mental health. Crediting DeRozan with inspiring him to speak out, Love revealed that he’d experienced a panic attack in a recent game:

“When I got to the bench, I felt my heart racing faster than usual. Then I was having trouble catching my breath. It’s hard to describe, but everything was spinning, like my brain was trying to climb out of my head. The air felt thick and heavy. My mouth was like chalk. I remember our assistant coach yelling something about a defensive set. I nodded, but I didn’t hear much of what he said. By that point, I was freaking out. When I got up to walk out of the huddle, I knew I couldn’t reenter the game — like, literally couldn’t do it physically.”

Love went on to describe the “tough it out” culture in the NBA, which made him initially unwilling to seek help:

“When I was two or three years into the league, a friend asked me why NBA players didn’t see therapists. I scoffed at the idea. No way any of us is gonna talk to someone. I was 20 or 21 years old, and I’d grown up around basketball. And on basketball teams? Nobody talked about what they were struggling with on the inside. I remember thinking, What are my problems? I’m healthy. I play basketball for a living. What do I have to worry about? I’d never heard of any pro athlete talking about mental health, and I didn’t want to be the only one. I didn’t want to look weak. Honestly, I just didn’t think I needed it. It’s like the playbook said — figure it out on your own, like everyone else around me always had.”

Not wanting to look weak is a very common and powerful motivator. Yet there is a growing sense that “toughing things out” and the self-isolation that comes with it is not actually helpful. Dr. Brene Brown, professor, speaker and author of books like Daring Greatly, is a big advocate for the importance of vulnerability. In conversation with Krista Tippett, host of the On Being podcast, she put it this way:

“Vulnerability is the very first thing I try to find in you and it’s the very last thing I want to show you in me. Because it’s the glue that holds connection together. It’s all about our common humanity. When we own our stories and we share our stories with one another, and we see ourselves reflected back in the stories of people in our lives, we know we’re not alone.”

At Spark, we really believe in the power of stories, and the power of sharing them. It’s why Brad, when telling the story of how Spark began, is honest about his own struggles with mental health. As caregivers, we’ve seen how relationships built on honesty and trust can be transformational. We’ve seen the power of vulnerability.

Professional athletes wield a lot of power because of how many people they can reach. There is real power in someone as widely loved as DeRozan saying something like this about depression:

“It’s not nothing I’m against or ashamed of. Now, at my age, I understand how many people go through it. Even if it’s just somebody can look at it like, ‘He goes through it and he’s still out there being successful and doing this,’ I’m OK with that.”

Since he sent it out, DeRozan’s tweet about his depression has been liked over 27,000 times. Love’s tweet sharing his story has been liked over 120,000 times. The comments on both are overwhelmingly positive (which, given the caustic world of “basketball Twitter” is saying something), with responses like this one: “You may never know what an incredible thing you have done by sharing..thank you doesn’t begin to describe this mother of a 15 y/o son who is hard wired with this …#overwhelmedwithemotion”.

It seems fitting that DeRozan and Love faced each other in the playoffs after speaking out about mental health, and just in time for mental health awareness week. The Raptors have been met with a fair bit of derision in response to being swept in four games by LeBron James, yet again. DeRozan has remained courageously honest, saying “This is probably the toughest, most frustrating, difficult, lowest feeling I’ve had. You get to that point where you’re standing firm through everything and you feel like you can’t get knocked down again, and you realize you do get knocked back down again.” I feel sad for him, reading that. But I also know he’s overcome so much already, and he will overcome this disappointment. And I’m grateful for his example.

In the wake of DeRozan and Love speaking out, the conversation has continued. Two weeks ago the NBA kicked off a mental health awareness campaign by releasing a video featuring the two stars. “Never be ashamed of wanting to be a better you” DeRozan says after the screen flashes the words “IT’S ALWAYS OK TO ASK FOR HELP.”

“The impact they are having is enormous” said Kathy Behrens, the NBA’s president of social responsibility and player programs. Thanks to DeMar DeRozan and Kevin Love, thousands more people out there who may subscribe to the “tough it out” ethos have been shown that you can be vulnerable even when you’re job is to out-compete superhuman athletes in a testosterone-saturated environment. Thanks to their courage, thousands more people know they’re not alone.