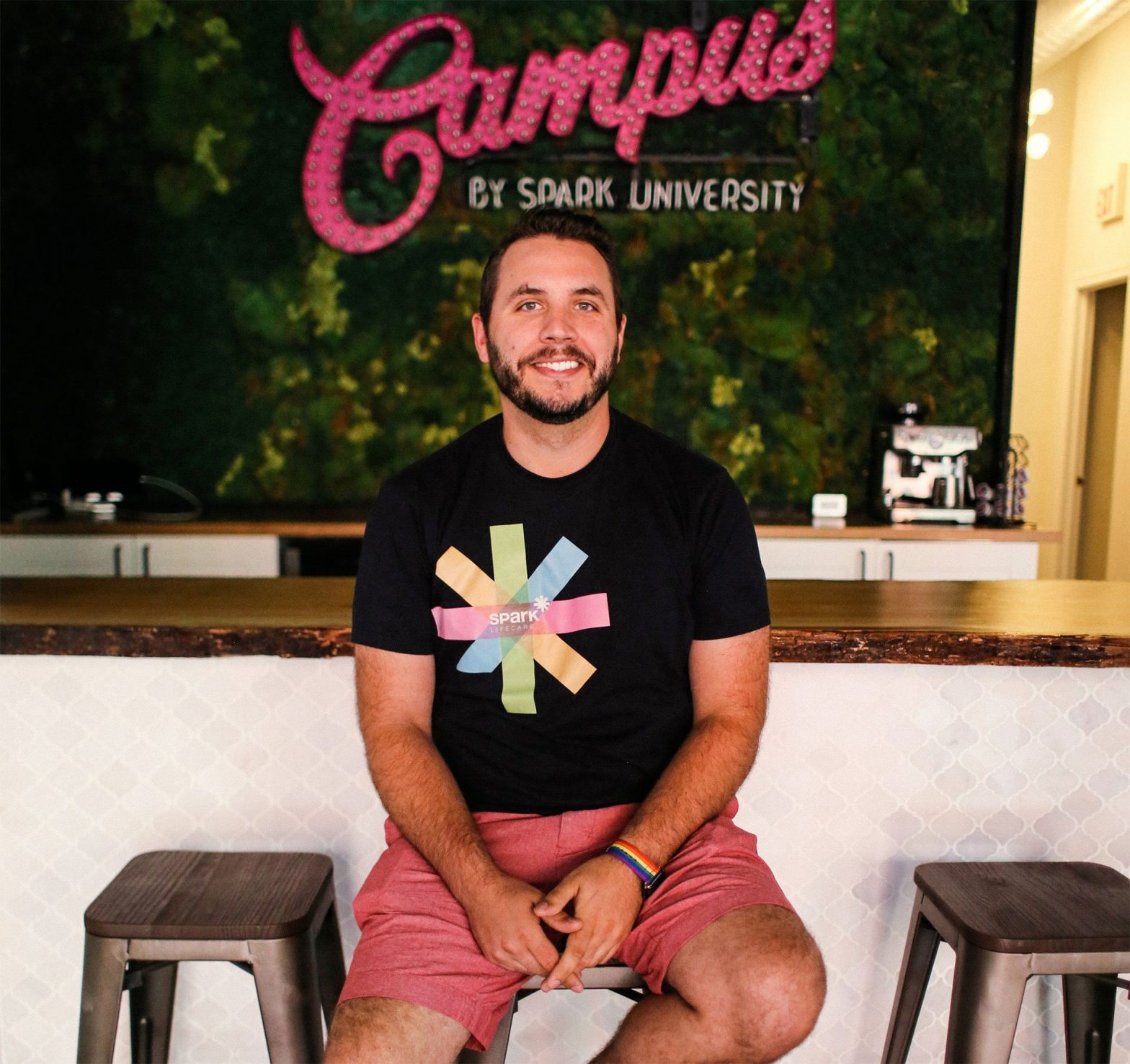 If you ask any one of his colleagues, they’d likely describe him as “the salt of the earth”. Case in point: Bradley Bezan, CEO of Spark Lifecare, does not accept awards, even one as prestigious as Ottawa’s Forty Under 40 Award, without recognition of his entire team.

“This is not a one person job,” Brad says with almost a decade under his belt in his leadership role. “I’ve received this award because of everyone who is here working beside me.”

Although you will never hear Brad boast about Spark’s accolades, this is one of several awards under the game-changing healthcare company’s belt since he began back in 2012. He shares a collective vision with his team of caregivers to transform the Canadian healthcare system, one person, one family at a time.

“Yes, of course I work hard,” Brad acknowledges, “but this award is not about me. This award is about my colleagues who are grinding day in and day out. I dedicate this award to my entire team.”

Spark’s success has come by offering a different story from most healthcare companies and government-funded programs/facilities that are generally bottom line focused. By serving the healthcare needs in Ontario with a strong sense of dignity and pride, mixed with the right amount of humbleness and empathy. By connecting people with the right caregivers and nurturing the networks they’ve built along the way.

We asked Brad a few questions about receiving the award and what sparked his company’s vision for a new way of doing healthcare.

How does it feel to receive Ottawa’s Forty Under 40 award?

“It feels really good to be accepted by your peers and not just acknowledged for doing good in the community. I feel this even more so than any other year with the impact of COVID,” he adds, alluding to the curveballs and challenges Spark’s team has had to overcome throughout the pandemic.

What do you think brought you to this moment in your career path?

“It’s hard for me to pinpoint exactly, but I think it’s a combination of my life’s experience mixed with some tragedy along the way.”

Growing up in the small community of Kapuskasing, Northern Ontario, Brad understood, at an early age, to never take anything for granted. He not only expresses gratitude for how far he has come but is humbled by the growth experiences that have built him along the way.

“My Camp Cadanac experience in high school is where it all started.”

In fact, he wrote a heartfelt blog about it, sharing details of his Camp (nickname – Scuttle) and stories of his encounters with mental illness both at home and at camp where he worked every summer (run by the North Eastern Ontario Family and Children’s Services).

What really inspired Brad was the “Camp Reunite” initiative – working with kids who had gone through “the system”, often getting separated from their siblings while going through the process of relocation through family and child services. Every summer, the camp brought the siblings together for one week in nature to reunite. Brad is forever grateful to have been a part of this experience. He was particularly impressed by the camp counsellors’ efforts to respect privacy and anonymity of the children in a small community where “everybody knows your name” – especially since these children often dealt with serious mental health issues and suicidal tendencies as a result of their traumas.

With no experience, Brad found himself working alone in isolation with these kids where there were no onsite resources or care (e.g. social workers, psychologists) readily available.

During this time, things were starting to fall apart at home. Brad’s father was battling with alcoholism and mental illness. Brad began to share a mutual trauma bond with many of these children as a result. They recognized that he actually understood what they were going through: the anxieties, the fears, and being unsure of how to deal with all of the emotions at once. Brad saw this as an opportunity to offer support to one another as he warmly states, “these kids would look up to me and they knew I had some of the same feelings to wrestle with.”

Both sides were able to feel safe enough to open up and share some perspective on how to begin the healing process.

How does this whole experience relate to the inspiration of Spark?

“Looking back, it blows me away thinking about what we were able to accomplish without any support or help, especially in a time where mental health was much more stigmatized with less open conversations available.”

Brad later went on to work as a respite worker in healthcare. While working in the field, he noticed a massive flaw in the system and was inspired to start Spark Lifecare not too long after. Drawing from past experiences, Brad knew there was a deep need for compassionate care in the Canadian healthcare system.

What have been some of the biggest challenges & learning curves in your experience as CEO of Spark?

“Because I’m not doing what I’m doing for the money; from a company standpoint, it at times can be challenging,” admits Brad.

By never viewing the company and its practices through a financial lens and always through a human lens, the bottom line can reflect in a less favourable way despite making progress in changing the disadvantageous systems that are already in place.

At Spark, the question and approach to every situation is always: “If you were the client, how would you want to be treated? What’s the right thing to do?”

This does not go hand in hand with profit building, Brad confesses. But that doesn’t seem to phase him or slow down the company’s momentum.

“We believe in treating all human beings with dignity and respect. We are building a proud social enterprise at Spark by empowering people and putting human beings over profits. I truly believe that in building a social enterprise like Spark and cultivating its rare culture (i.e. not the societal “norm”), we contribute to the overall collective consciousness when it comes to business ethics and the consumerism of healthcare services.”

The challenge becomes, “you can’t say yes to everybody.” Brad hears these words often from his colleagues. It requires striking a balance between it all which is one of his greatest ongoing challenges as CEO.

Being a father of two young children, Brad jokes that his wife has to take his phone away from time to time at the cottage so he isn’t constantly working. This is the reality that many entrepreneurial parents have to juggle.

How does he plan to master this challenge?

One thing Brad strives for is a duplication of company prototypes, aiming to teach the team how to emulate what he does every day. He aims to keep things simple as he realizes the need and scale for Spark services are huge. “Without being able to duplicate and recreate what’s needed, we’ll never get anywhere.”

What have been some of the biggest company successes for yourself and the Spark team?

“It’s really hard to put into words, but what I can say is that my team has grown alongside me, as fast as they possibly can, every step of the way. I’m inspired by what they are able to accomplish every day.”

Whenever he hears of one of his team members feeling like they are ‘not doing enough’, he reminds them, ‘you’re everything I’ve ever dreamed of and then some in your Sparkler role!’

He often asks himself – Is it possible for a business to be healthy and not rely on government contracts, or back door dirty deals that happen so much in our field? Can a company really do well just by doing the right thing? And so far, the answer to that has been ‘yes’.

“It’s been hard, but lives have been changed forever for the better. Our model exudes sustainability.”

Other successes worth celebrating?

Brad puts full faith, responsibility, and trust in his team when it comes to decision making.

“I trust my team without constantly looking over their shoulder. I want everyone to be the CEO of their own positions within the company. We need to trust each others’ intentions.”

Brad believes in more productivity coming by way of more freedom from authority. He is much more likely to give more praise for “sweet failures” to empower his team, rather than labeling them as “mistakes” As CEO, he actually encourages risks taken by employees for the sake of the client’s best interest. These risks are part of the sometimes steep learning curves Spark caregivers must face when dealing with rapid company growth, and in Brad’s eyes, its par for the course through trial and error.

He also very much encourages and promotes the idea of self care (listed as one of the top of priorities expected of his team). To always take good care of themselves and to honour their mental health states and where they are at in the process of it all. After all, we are only human.

What is the best career advice or inspiration you’ve been given along the way?

“I love the idea of doing well by doing good. It’s advice that really resonates with me.”

“I wish I could go back and tell my younger self that it’s all going to be ok and that you have permission to be yourself. And really, BE YOURSELF! At the end of the day, success came when I embraced myself and who I truly was.”

Where would you like to see the future of Canadian healthcare go and how is Spark a game changer in your opinion ?

“I believe the Spark way is going to be the future of Canadian healthcare. Spark culture is based on compassion, empathy, and ‘humanism’. I want us to be the gold standard with client and employee treatment. I want us to be a pillar example of a healthcare company that is people driven, not bottom line driven or ‘clinic’ oriented.”

“At Spark, I’m trying to create the community that I wished I had access to given what I went through in my youth. The only way it gets done is by bringing in the right people to do the job.”

“We’ve managed growth because we’ve grown each step of the way as individuals. We’ve received awards because we’ve empowered our employees who have changed lives for our clients. Spark has created a community where people feel safe to pursue their passions authentically. To me, I am more proud of this over the merit of any award.”

Kristin is a Freelance Creative Writer, and Wine Consultant based in Ottawa, Canada. When not writing wine articles, or poetry for fun, you can find her likely wandering in nature, and exploring all of the natural wonders our beautiful planet has to offer.