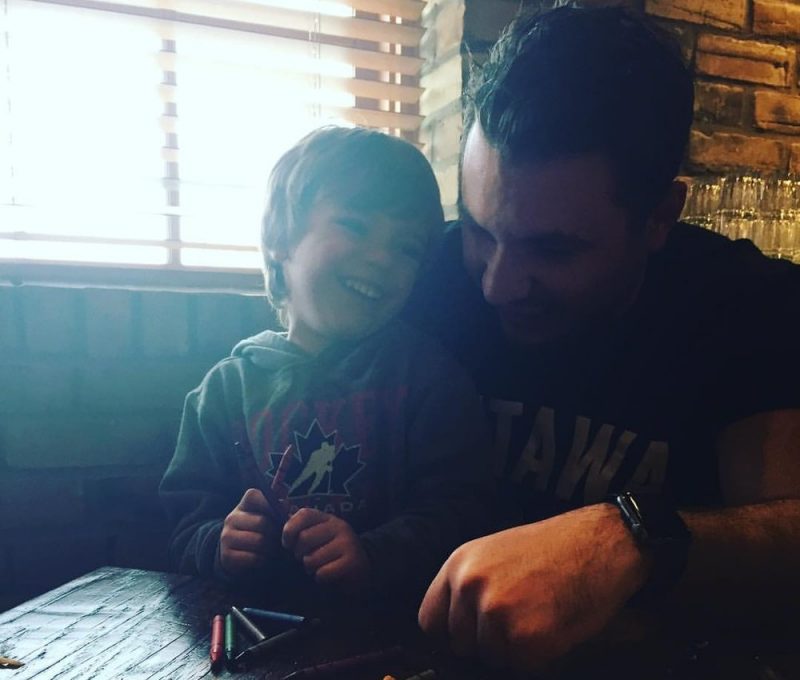 My son Cooper is five years old. He is a beautiful, amazing, hilarious bundle of joy. Everything changed for me the moment he was born. There’s nothing else like holding your child for the first time. Nothing else like the feeling that he needed me and his mom more than anything in the world.

For the first few years of his life, Cooper developed normally – sleeping through the night, and walking (running, actually) early. He loved dinosaurs (like his dad), danced regularly (already better than I did) and often brought me to tears with his generosity and compassion. Everything was great. But as time went on, we noticed more and more challenges that he was facing.

He wasn’t vocalizing as much as other kids his age. When he turned three, he still wasn’t able to respond in full sentences. His struggles to communicate made playing with friends difficult. He also had difficulty following instructions and connecting actions with consequences.

There were physical challenges as well. Coop was really bothered by the feeling of certain things on his body, like clothing tags or long sleeves. He was easily overstimulated. For example, he would cover his ears when the toilet was flushed. He also had a very hard time sitting still. And while we thought his constant hugs were just due to him being very affectionate (partly true) , we eventually learned that it was also because he had a hard time calming and orienting his body.

Working in the healthcare field, I knew what a difference it makes when kids receive interventions early. We scheduled Cooper for a full assessment at CHEO. He was eventually diagnosed with a speech delay.

The day we received the assessment, I cried. A lot. As a parent you want the world for your kids – all joy and no heartache. The thought of my son having such difficulty with something so important was devastating. Talking it through with my loved ones reminded me of everything he has going for him. The best mom in the world. A little brother who thinks he’s the greatest. A wonderful extended family. An environment where he can access the resources he needs. I pivoted quickly from “this sucks” to “alright, where do we start?”

CHEO connected us with a school readiness program (CHEO deserves so much love for everything they do) and referred us to an Speech Therapist and an Occupational Therapist.

Speech Therapy began wonderfully but things got off to a rockier start with Cooper’s OT. After assessing Cooper, she proceeded to tell me, essentially, that he was going to have a really hard life. “He’s going to try to be like the other kids but he’s never going to get there, and you’re going to have to be ok with that.”

I didn’t say anything, but I was furious. I got home, spent a bit of time calming down, and then sent her an email. The tone was pretty firm:

Today, I felt that you put up a barrier for Cooper. I realize he will have obstacles that he will need to overcome in life. But I’m looking for quantifiable data. Not generalized statements about a limited future for our beautiful boy who has come so far already. The most important prerequisite for his care team is the unified belief among us that he will have a full and happy life regardless of the way he has to adapt in order to do so.

I sent it off and expected some push back or defensiveness. To my surprise, she wasn’t deflective or defensive. She apologized. She explained that she didn’t mean to communicate such a negative picture. She just wanted to prepare me properly but didn’t choose her words well.

1. YOU NEED TO BE THE QUARTERBACK FOR YOUR CHILDREN.

Many of us are used to taking what professionals say as gospel. But we have to be ok with challenging them. Therapists are human too. A lot of therapies are inexact and its important to ask questions and challenge conventional thinking. You need to surround your kids with people who will help them toward their goals, whatever their designation.

Now don’t misunderstand me. We definitely need to have respect for and listen to health expertise. There’s a lot of misinformation that gets thrown around based on a general distrust of the medical system, and I’m not advocating for that. But, when it comes to your kids, you are the expert. Only Coop’s mom and I know that he needs your hand on his belly to help him fall asleep. Every parent knows dozens of little specific things like this when it comes to their kids. When we combine the broad expertise of healthcare professionals with the particular expertise each of us has in our own kids, we get the best of both worlds.

This is “client-centred care”, and its the approach we’ve always taken at Spark. In our experience, as both givers and receivers, the best kind of care acknowledges that our clients know themselves better than we ever will. So we can advise, we can provide expertise, we can help them find their passions. But we also need to listen. Let them set their own goals and define their own limitations. Working as equal partners in care, that’s how we help people live their best lives.

2. THE WORLD WILL SOMETIMES TRY TO PUT LIMITS ON YOU. DON’T LET IT.

I lead at Spark and raise my kids with a “no limits” mentality. I want my boys, my team, everyone to believe that they can overcome any obstacle. If you need to do things differently than what’s typical, just adapt the circumstances. I know that sounds naive. But there are so many examples of people shocking the world because they (or their parents) refused to accept the limitations put upon them.

Temple Grandin was diagnosed with autism as a toddler in the 1950s. Her parents were told that she was brain-damaged and should be institutionalized. Temple’s mother, Eustacia Cutler, refused. She enrolled Temple in speech therapy, read to her constantly and found private schools with staff who would be willing to work with Temple’s needs. Fast forward to today and Temple Grandin is a professor of animal science, a renowned author and designer of human livestock handling facilities. Rather than a limit, the conditions of her autism were actually essential to her ability to design new technologies.

Steven Spielberg had undiagnosed dyslexia as a child. He was branded as lazy by teachers and bullied by classmates. Though it affected him emotionally, he never let it limit him. Movies were his refuge and taught him not to be ashamed of being different. Fast forward to today and, well, I assume you’re familiar with his work.

The most inspiring stories of refusing limitations are right next door. There’s a couple in the Spark community who for years provided long-term foster care for kids coming from traumatic situations. One boy in particular was given to their care with the brutal prognosis that “if he ends up in jail for robbery instead of murder, you’ll have done a fantastic job.” They completely ignored that prediction and went about raising him without limitations. He’s now a healthy adult with a steady job and a stable life.

Don’t accept the world’s limits. Gravity is real and we’re not all destined to play in the NHL, but we are all capable of far more than it may seem.

Cooper recently finished his OT program. Things like clothing tags don’t bother him nearly as much as they used to. He’s learned how to adapt. If he’s been sitting for a while, he goes and gets a drink instead of getting upset. He started school this fall without any limitations in communication. He’s able to just focus on being a kid – mess around, fall down, laugh. His teachers have said that he’ll be a leader in his class this year because of how well he behaves and how far he’s progressed.

I’ll leave you with a beautiful image. A few months ago I was doing the dad thing, watching a typical 5-year-old soccer game. All the kids were just one giant pack chasing the ball down the field. Except all of a sudden one kid peeled off from the pack and ran to the sidelines and right off the field. It was Cooper. He’d found a butterfly. I laughed and realized he’ll always dance to his own tune. And I couldn’t be happier about it.